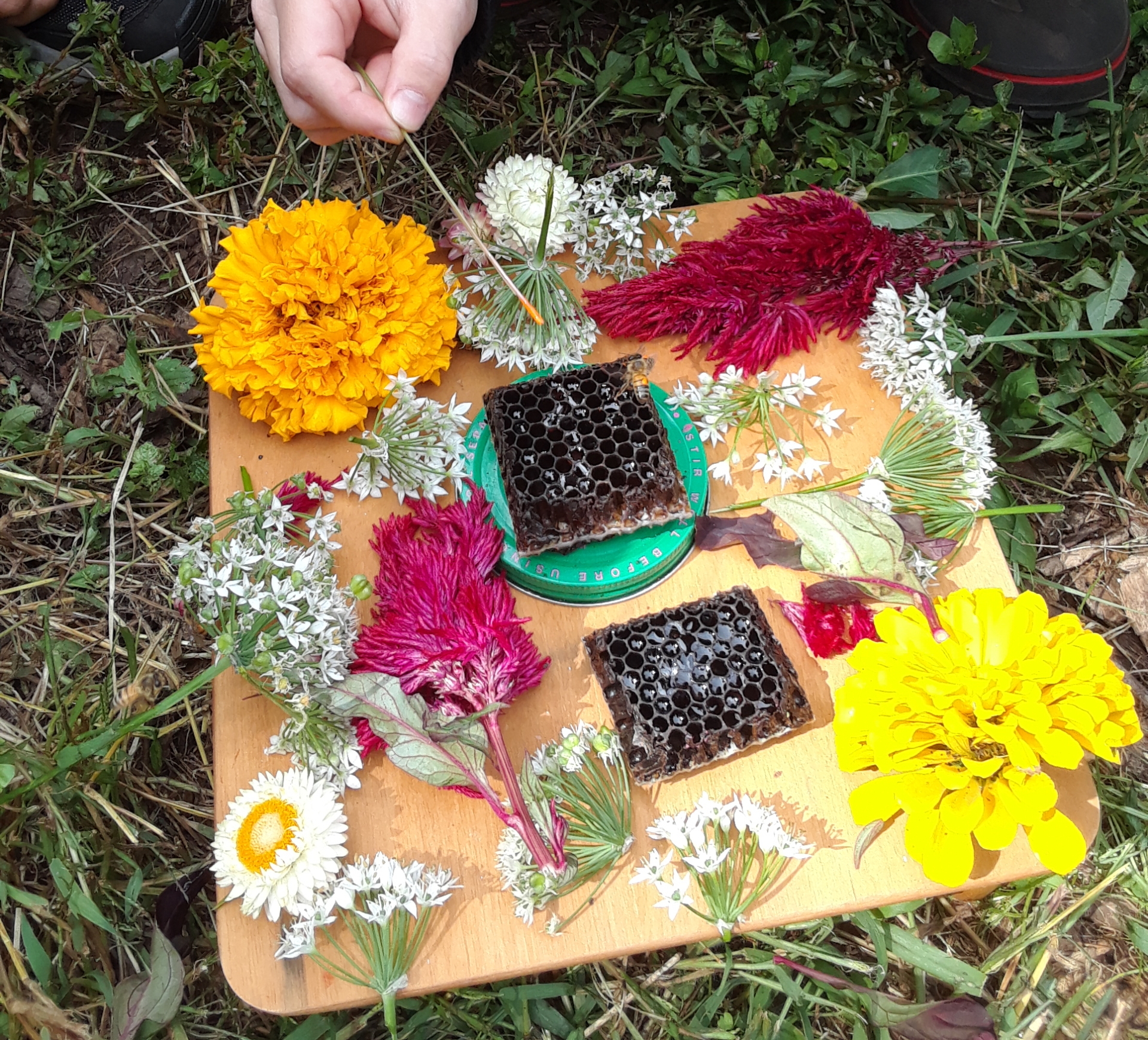 As a beekeeper, I get stung. A lot. Getting stung hurts, and things that hurt can be scary. I’ve noticed, however, that when I’m opening hives for groups of students, the possibility of getting stung often serves as a sort of fuel for curiosity. As an apicultural educator, my job is to try to encourage and engage that curiosity while easing those feelings of fear. To that end, every fall, as soon as I am able, I do an activity I have begun to call the “Bee Cafe”.

Using the methods laid out in Tom Seeley’s book Following the Wild Bees, my students and I do a modified version of bee tracking (or “bee-lining). Honey hunters, (and more recently research scientists), have used similar methods for a long time to find hives in the wild. We begin by observing foraging bees on garlic chives (a favorite late summer/early fall food) and talking scientifically about this behavior: What are they doing? Why are they doing it? How is foraging behavior different from defensive behavior? We then capture a few foraging bees in a special box and feed them a rich sugar syrup in the hopes they will recruit their hive mates to return. 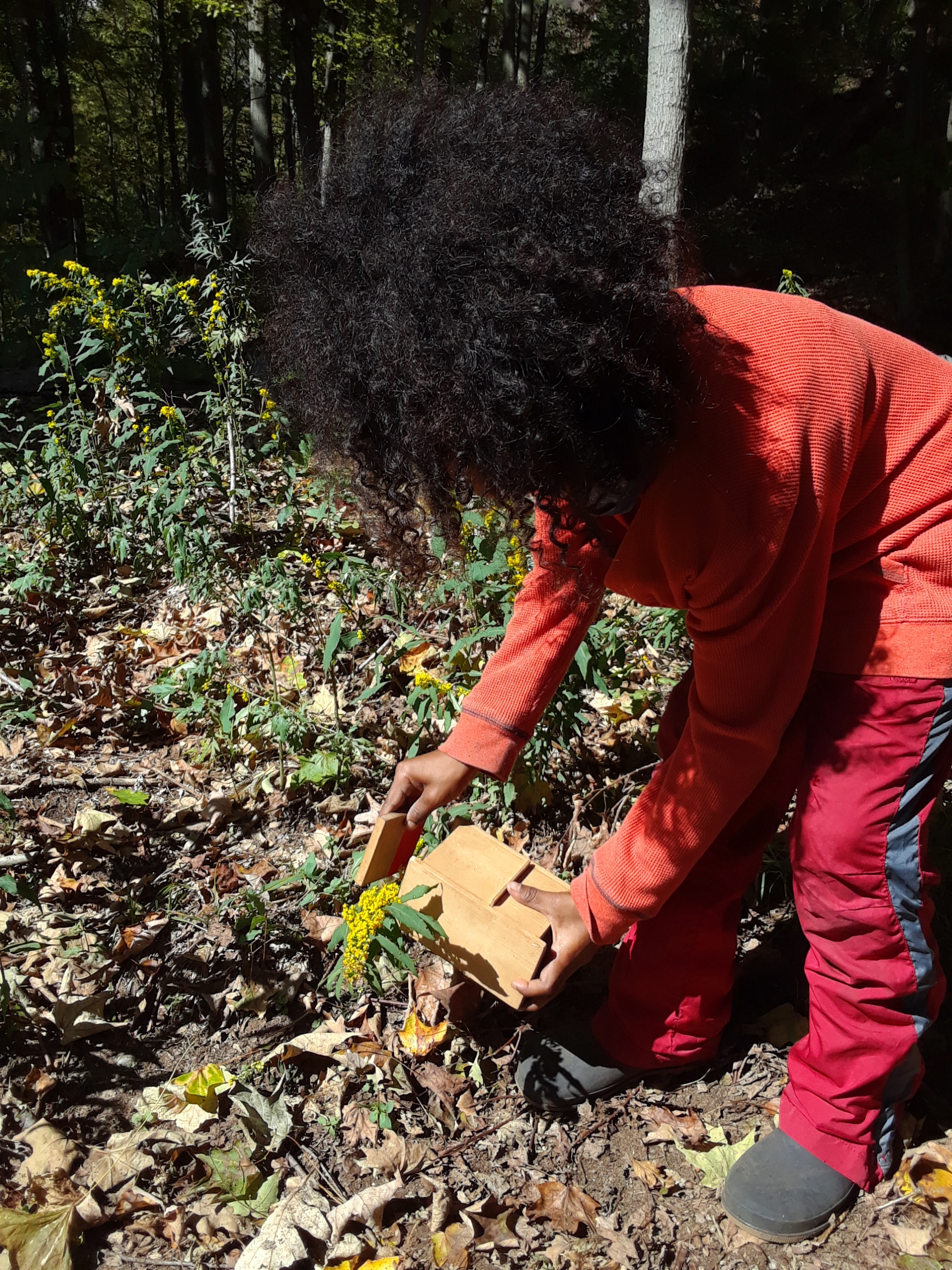 As bees return, they are marked with small dots of paint.  Watching the direction they fly off in and timing how long it takes them to return, one can get a general sense of where and how far away their hive may be. Since we are pretty certain any bees we catch would be coming from the Common Ground hives, we’re less interested in tracking them and more interested in setting up a “cafe” for the bees.

Setting Up the Bee Cafe:

As this activity unfolds, a few things begin to happen. First, the theoretical understanding of bee behavior I present is directly experienced by students observing the honeybees coming to the flowers to eat. Because the bees are foraging on plants, and not, say, our snacktime apple slices, it is easier to calmly observe their behavior. When we add a drop of sugar syrup to a flower, the bee will stay longer, allowing for closer observation, and reinforcing the fact the bee is there to eat and not attack. 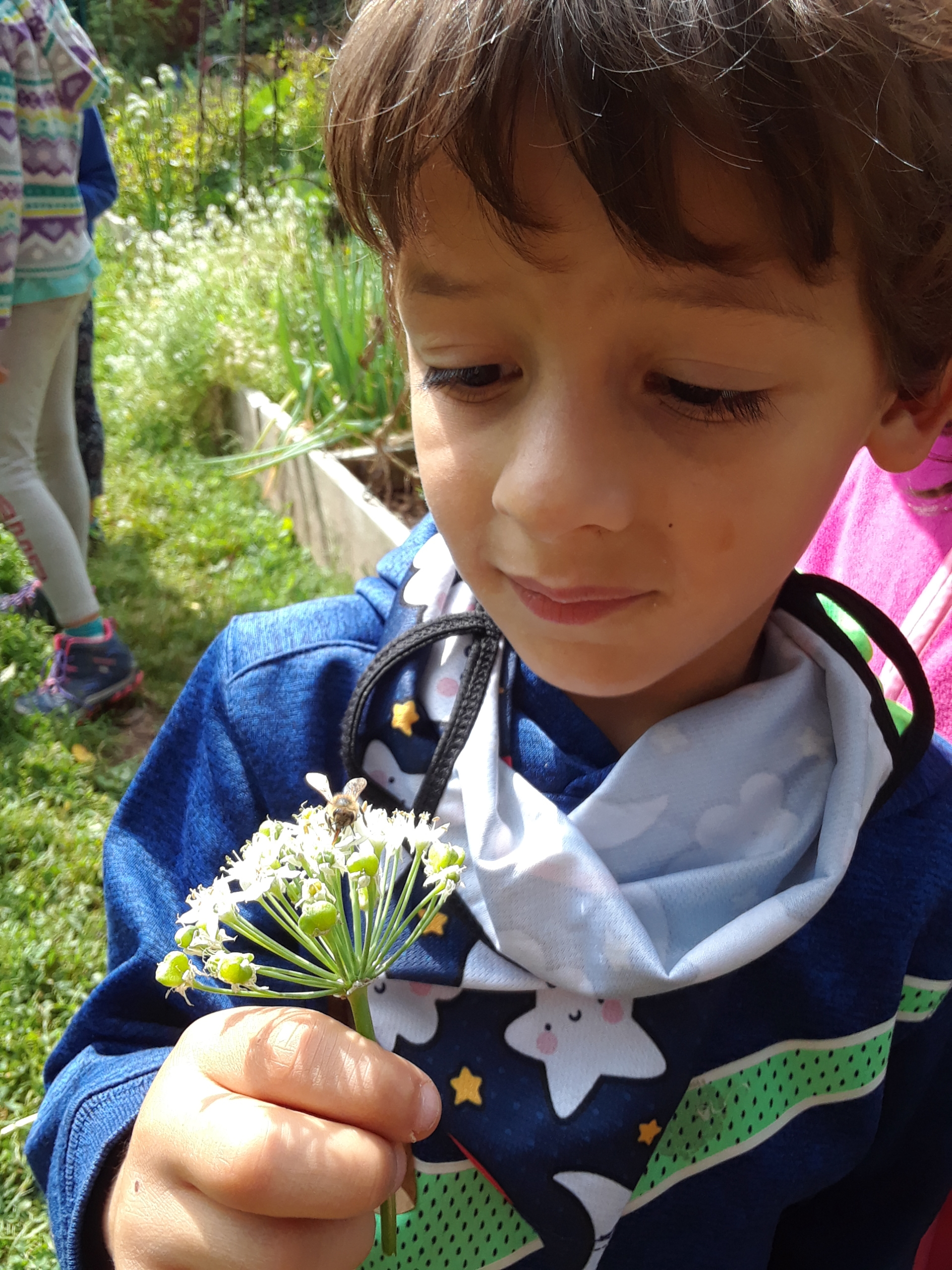 The idea of catching a bee in a box seems so risky and outlandish, but as my students see how simple and safe it is, and how the bees’ behavior is predictable (the box has a false exit with a window that lets in light but traps the bee), their enthusiasm quickly takes over. The bees we catch in the box are offered a piece of old comb filled with sugar syrup, and then closed in so they can fill up. The idea is that the sugar-rich syrup we offer will be more desirable than the flowers we caught them on, and therefore, they will want to return to our food source.

Before I open the box, I prepare my students for another fascinating behavior they will witness: once released, the bees fly in a figure 8 pattern, mapping out the area so they can remember how to find us again, and communicate the way to their sisters back in the hive. As bees begin to return, we carefully paint some of them. Up to this point, we have been doing everything a honey hunter or research scientist would do to find a wild hive.  Here, however, is where our bee-tracking activity fully transforms into the opening of a “Bee Cafe”. For we don’t simply paint the bees, we also name them. The simple act of naming the painted bees shifts the activity from one where we are observing fascinating insects, to one in which we are hanging out with our friends.

So: starting from a place of fear, we begin with a theoretical understanding of bee behavior, followed by direct observation. Reassured by our observations (and a teacher we trust), curiosity, fueled by the energy that fear can put in our bodies, begins to take over. Once the bees have names, it’s a surprisingly short hop from watching your friend eat at the Bee Cafe to deciding you’d like that same friend to lick some sugar from your finger. 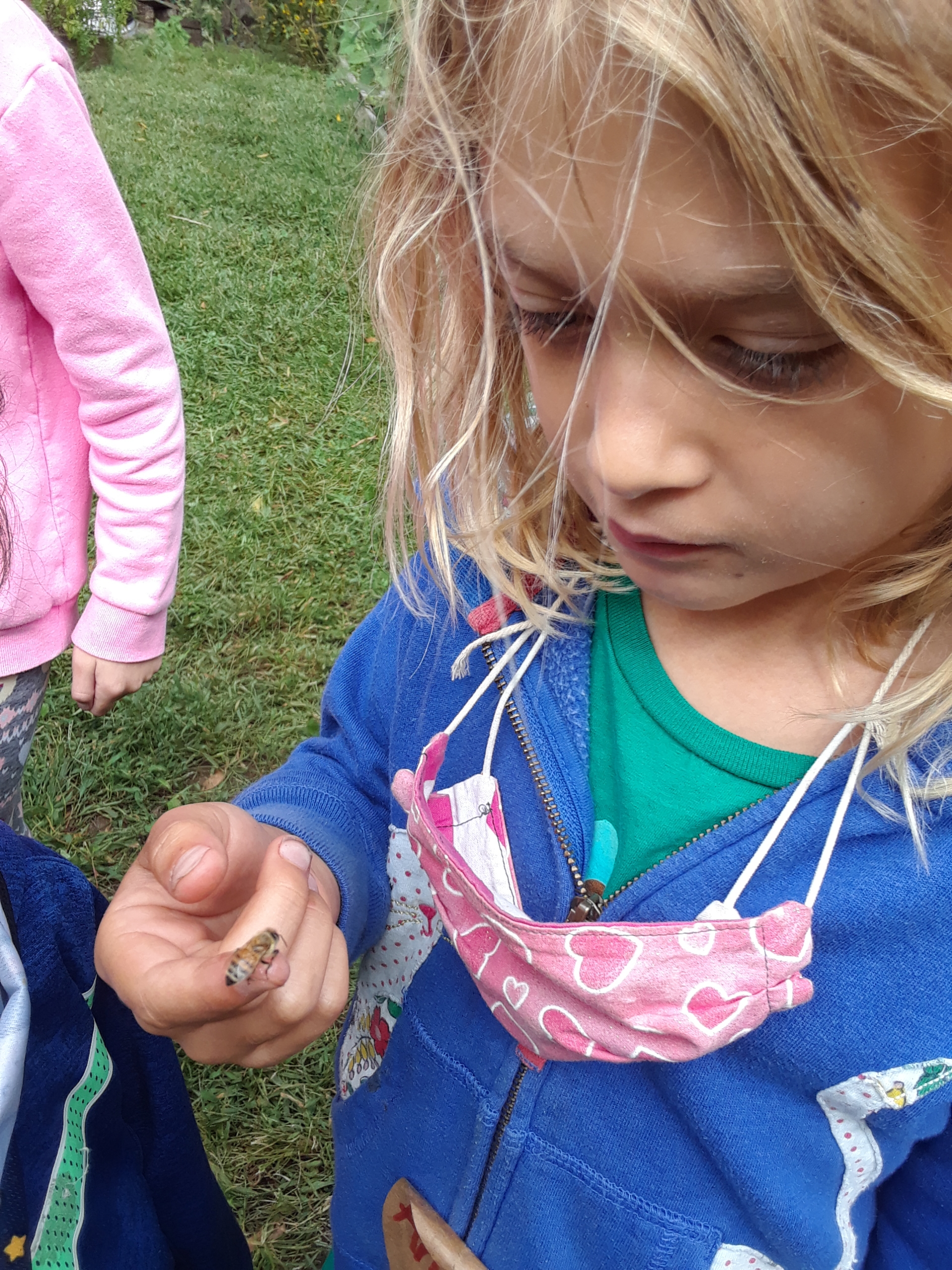 It takes a while, sometimes into our lunchtime, before the cafe gets really buzzing. But once it does, it is a mesmerizing sight. The honeycomb “table” looks almost as if it is boiling with bees! It’s almost irresistible at this point not to try to put a sugar-coated fingertip right into the cafe to see if you can get a customer. Or to pick the entire table right up! 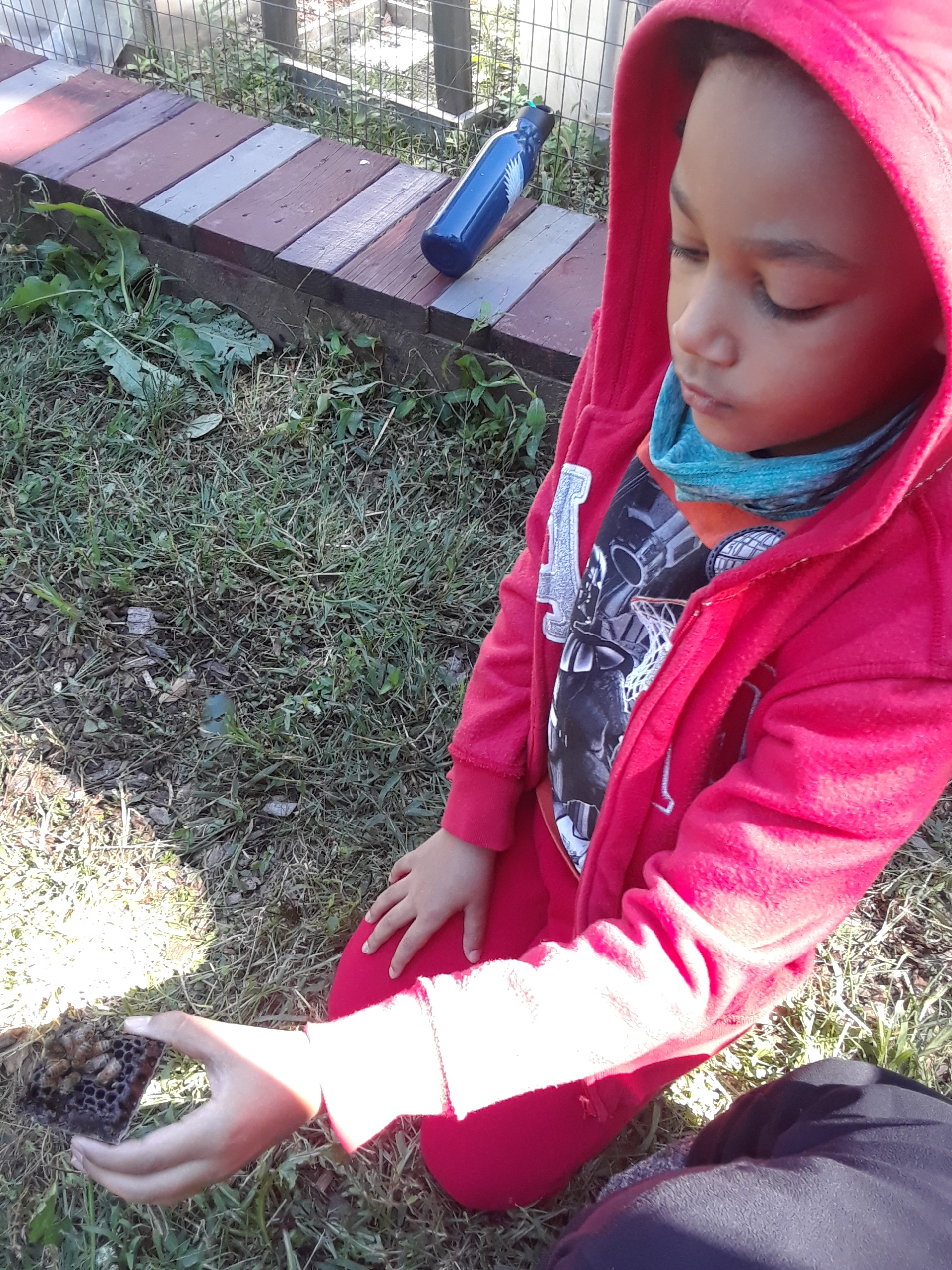 One of my very favorite moments with this activity occurred the first year I led it. One student developed a special bond with a bee he named Olivia. We had been talking about how when the bees make their map to remember where our “cafe” is, they probably include us sitting around watching in that map. We wear bright colors, we have beautiful hair, we smell a certain way. This friend offered Olivia a drop of sugar syrup from his finger, and she ate out of his hand. The next day, as we were walking in a different part of campus, Olivia found her friend and came and landed back on his hand!

Watch the video below to see that same friend just a few years later:

—
About the author: Tim Dutcher is a NatureYear teacher at Common Ground and manages the upper garden/learning garden. He’s been learning with and from the bees as a beekeeper since 1999. 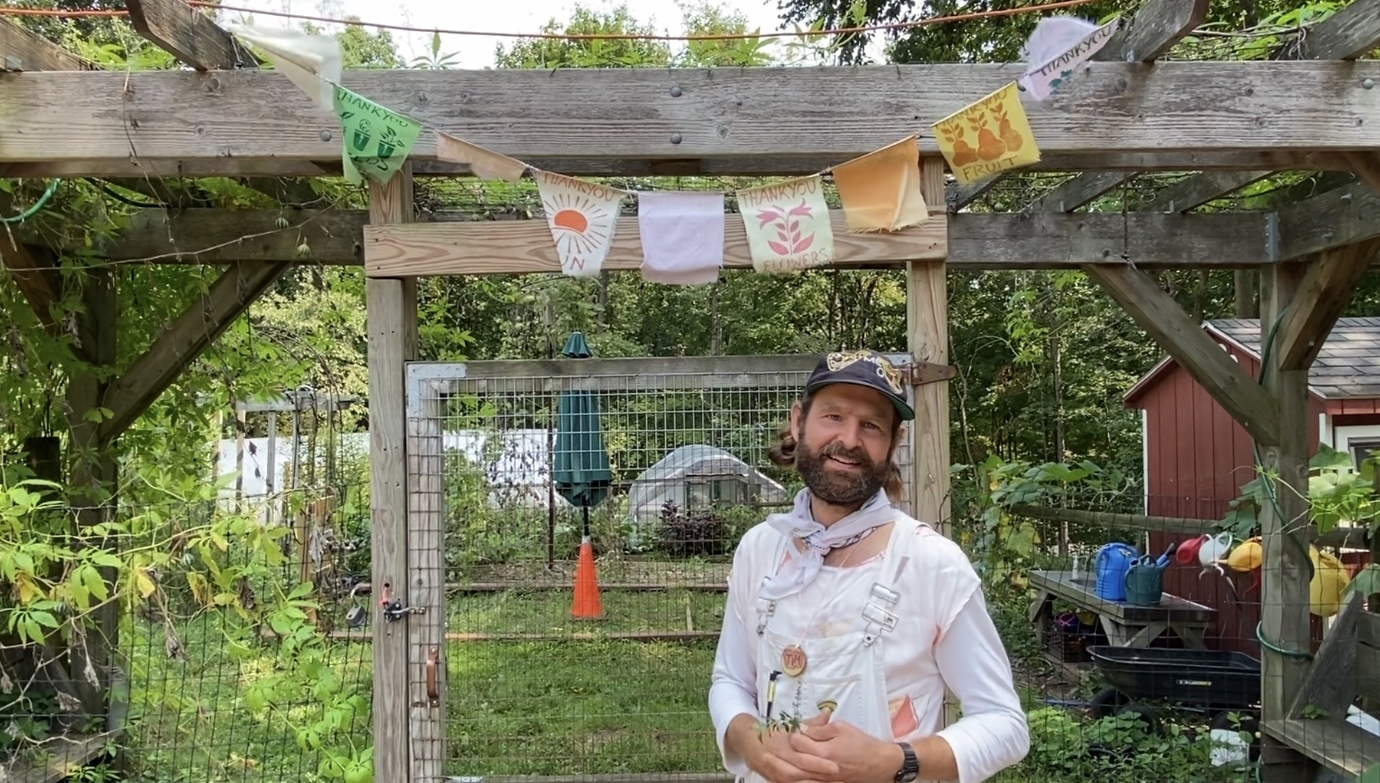