We recently caught up with Charlie Dow — CG ‘14, University of New Haven Masters in Environmental Engineering ‘20 — soon after he defended his thesis research, focused on a new process for dewatering algal biofuels. While wrestling with his puppy, Ahsoka, Charlie updated us on his life now, and reflected on how Common Ground helped put him on this path …

What are you up to these days!!?

At UNH, there’s a Provost Assistantship program where graduate students can do research with a faculty member. One of the chemical engineering professors — who I had during  my senior year of undergrad — asked me if I was interested in doing research with biofuels. We took her background with gas hydrates , and mine in biofuels, and came up with a joint research project.

I don’t know how much you know about gas hydrates. Under the sea floor, and land deposits — there are trapped gases. In Alaska, there are places you can break off a piece of ice and light it like it was coal. She’d been looking at displacing methane hydrates with carbon dioxide  hydrates. Since I had done biofuels stuff, we decided to focus in on applying these techniques to algae. We looked at wastewater systems, sludges, which my advisor had used pentane hydrates to dewater, — how much CO2 you could use to grow the algae, then to remove water from the algae. It could definitely de-water algal solutions — not the highest yield, so would need to be tested as a secondary dewatering  process. It would likely very expensive to do.

My research was definitely disrupted by the pandemic — we were just waiting for our reactor to get back when the university shut down. But I was able to use my smaller-scale trial data to finish my research and write my thesis. On May 11, I defended my thesis by Zoom.

How did your CG experience put you on this path? What (if anything) did CG instill in you re: community and the environment?

When I came to Common Ground, I didn’t really know what my interests were, what I wanted to do. But by the time I graduated, I knew where I was headed. From there, college and graduate school could just be about refining my interests into a career that meets a need.

At Common Ground, I took Calculus AB, and then — since Common Ground didn’t offer Calculus BC — I went straight into Calc 2 at Southern Connecticut State University while still in high school. It was a big leap, and I didn’t know what everything meant. So I learned to go to meet with the professor, and ask for help, pretty quickly.

My advice to current high school students getting ready for college: Specifically with STEM, engineering — when you are looking for opportunities, talk to your advisor. The way I found research experiences early in my undergraduate experience was talking to my professors, bugging my advisors. Also, if you are struggling with your content — none of the professors wanted anyone to fail. They want to hear from you. If you’re struggling, someone else is probably struggling. 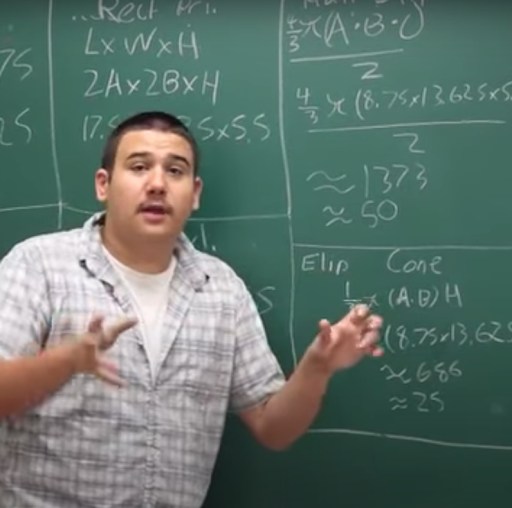 Charlie explaining a calculus problem used to determine the volume of the CG compost pile.

Two Common Ground opportunities that definitely put me on this path were an internship with The Nature Conservancy’s LEAF program, and another internship with Amistad America.

LEAF– Leaders in Environmental Action for the Future — was a month-long, no contact, you’re out there on your own kind of program. We were in the deep North Woods of Maine, where we saw bears and stuff. We were surveying culverts in the Aroostook watershed, and staying at what was basically a campground. I think that sparked my interest in water quality, and in keeping natural resources preserved.

With Amistad America, a group of Common Ground students was able to go to the Dominican Republic for a week. We worked with stateless people — who don’t have Dominican citizenship, for a variety of reasons. We also took water samples of rivers there, which we believed to be polluted, to see if we could determine the sources of this pollution

What does the future hold for you?

I’m looking for a job! Carrie Beech (Common Ground ‘16) is starting a PhD in psychology at University of Pennsylvania, so we are moving down to West Philadelphia in a couple of weeks.

Ideally, I want to get into safety consulting. I would like to get my Professional Engineer license down there, which is a 5-year process.

I’m drawn to safety consulting because I want to protect people.  We need these commodity goods, like plastics and acids, to make other things. But people don’t need to lose their lives over them.

I’ve written a few different papers on the Bhopal chemical disaster, in 1984, and I think that really influenced me. Union Carbide had a chemical plant in Bhopal, India. Chemical companies went there because it was cheaper, and because they could get away with things. There was a huge release of methyl isocyanate, which impacted hundreds of thousands of people. It was exploitation of poverty, of minorities — which also happens in the United States, but maybe not in quite as blatant a way.